‘A certain disciplined exoticism’: Ian Fleming and the art of writing a thriller 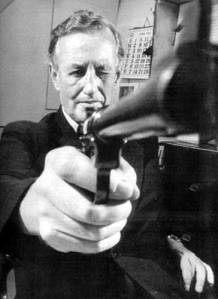 I was delighted (via a fellow blogger) to be pointed in the direction of a wonderful essay by Ian Fleming entitled ‘How to Write a Thriller’, first published in August 1962 in American magazine Show (I’ve not been able to source an original copy, but would love to see one, even in digital format).

Now, I don’t consider myself a hardcore Bond fan – although I have read Casino Royale and Live and Let Die – but Fleming’s always struck me as someone with an interesting biography. It was fascinating to read in the essay that the card game that forms a central part of Casino Royale (in both the original book and the most recent film version) was based on fact. During World War Two and a stop-over in Lisbon, Fleming learned that a number of German secret agents liked to gamble at a neighbouring casino – so naturally ‘the feverish idea came to me that I would sit down and gamble against these men and defeat them, thereby reducing the funds of the German Secret Service.‘ Of course, Ian – what could be simpler? But this is not a film, or a novel, and the game of chemin de fer does not go to plan. Fleming loses both his shirt, and the respect of his senior officer.

Fleming’s experiences during the war (working for Naval Intelligence) inform much of what we read in the Bond novels, and add to that impression of the reader drawing back a curtain and entering a secret world. This inside knowledge also helps to give the books what Fleming calls ‘the all-essential pace of narrative‘, and keep the story moving. When talking about his work, Fleming’s attitude is refreshingly bullshit-free. ‘Nothing must be allowed to interfere with this essential dynamic of the thriller,’ he says. ‘Each word must tell, and interest or titillate the reader before the action hurries on.‘

Fleming does these things partly by including exotic locations, where the sun is always shining – ‘a state of affairs which always lifts the spirit of the English reader.‘ Fleming is also keen to stimulate the reader’s other senses, including taste – ‘I have never understood why people in books have to eat such sketchy and indifferent meals,‘ he says, and this explains why many of Bond’s meals are described in such detail.

But it’s not enough for there to be just the exotic, just the unfamiliar; and this is perhaps the most interesting aspect of the Bond novels. They are stuffed with a range of household names and objects, which keep the books grounded in the real word – ‘a Ronson lighter… the Ritz Hotel in London, the 21 Club in New York, the exact names of flora and fauna, even Bond’s Sea Island cotton shirts with short sleeves.’ Fleming uses these ‘to comfort the reader on his journey into fantastic adventure,‘ but they also play the important function of rounding out Bond’s character, and making him more recognisable. Whilst he is a man doing an extraordinary (and enviable) job, he is one with tastes and preferences and idiosyncracies just like the rest of us. What he smokes, eats, drinks and drives is very much a reflection of his personality (not separate from it), and reinforces our picture of Bond as ‘an independent character who knows what he wants and gets it.‘

In the essay, Fleming also has some wise things to say to the aspiring writer (many of them concerned with the speed of knocking out a first draft; what Chuck Wendig calls ‘the beach-storming draft‘). ‘I never correct anything and I never go back to what I have written,’ Fleming insists. ‘If you once look back, you are lost.’ Fleming’s approach, as expected, is altogether more pragmatic – by moving only forwards, not only do you write 2,000 words a day, but also ‘you aren’t disgusted with them until the book is finished.’

I hope I’ve whetted your appetite enough to read the essay in its entirety. Before you do, a brief word of warning: Fleming’s essay was written in 1962, and is steeped in the attitudes of its time.  In the opening paragraph, Fleming bemoans the death of the sophisticated thriller, grumbling: ‘Writers seem to be ashamed of inventing heroes who are white, villains who are black, and heroines who are a delicate shade of pink.‘ I’m not convinced that he is talking primarily about race here – but there is nevertheless a suspicion that it may sit in the background (I vaguely recall being uneasy at some of the passages in Live and Let Die, but forget the details). And his view of women as more appropriately being ‘a delicate shade of pink‘ speaks (unfortunate) volumes for itself.

If that wasn’t enough, Fleming later goes on to describe his books as being written for ‘warm-blooded heterosexuals‘. Ouch.  As I said above, I haven’t read much Bond, but I’m familiar enough with the novels to know that James has some rather bizarre ideas about gay men. It seems that his taste for scrambled eggs is not the only thing he shared with his creator.