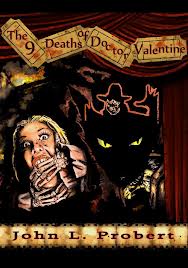 Books come in different types. There are books which you admire for their language. There are books that leave you breathless with the truth they tell about the human condition. And there are books like The Nine Deaths of Dr. Valentine which are all story – written to thrill and excite and entertain the hell out of you.

This is apparent on the opening page. The novella opens with a body, hanging from Bristol’s Clifton Suspension Bridge. A body which is on fire. Oh, and wearing a gorilla costume. ‘In the absolute blackness of the early March morning… it wasn’t long before someone noticed it.‘ No kidding.

Enter Detective Inspector Jeffrey Longdon and his team, desperately trying to make sense of what becomes a bizarre series of murders. Someone is killing doctors, in extraordinary and singular ways. And just when you think they can’t get any more… unique, they do just that – from burning gorilla, to death by unicorn, to mass scorpion stinging at Bristol Zoo. As the perpetrator himself says towards the end of the book, ‘I decided that if the rest were to die, they should die in colour.‘ Probert’s glee at writing the murder scenes is obvious; and whilst a little suspension of disbelief is necessary, the story gallops along at a lightning pace. You become caught up in this crazy vendetta, craning your neck to look into the distance to try and see where it will end.

One of the pleasures of the book is in contrasting the Technicolor murders with the irritated, caffeine-fuelled investigation of Longdon and his team. As you’d expect, Longdon is baffled by the case, increasingly frustrated at always arriving after the event, and trying to make sense of the insensible. He is a career policeman, trapped inside a world of fantasy, and you can’t help but sympathise with his predicament, awaiting the next outlandish crime and the wholly unhelpful reaction of the media. I enjoyed Longdon’s irritation; alongside the more cheerful approach of his assistant, Detective Sergeant Jenny Newham, this helps to keep the novella grounded, and give it a human centre. Whilst The Nine Deaths… may at times be fantastic, it is never remote – which is no small feat in itself.

The murders are inspired by deaths from various Vincent Price films, from 1959’s The Tingler through to the Dr. Phibes films of the 1970s. The novella is simultaneously a pastiche of, and tribute to, these films, with the murders becoming increasingly elaborate. The man behind them also has almost supernatural reserves of patience, money and skill, very much in keeping with Probert’s source material, which contains a variety of Price-portrayed supervillains. Also appropriate is the dark vein of humour that runs through the book, and helps vary the mood. In one scene, a victim is trapped inside a country church, at the mercy of both the killer and an elaborate medieval torture machine. ‘You’re not the first to receive such a dramatic method of punishment,‘ he is told. On the plus side, ‘I do, however, feel that you are the one that’s most going to upset the christening that’s due in here in about half an hour.‘

Probert’s love for these movies is clear throughout the book, and the e-book edition I read also includes a lovely postscript, in which the author describes how he came to write the novella, and references the Price films he draws on in more depth. You can’t help but be swept along with his enthusiasm, and I finished the book at a gallop, hungry for more. Lucky then that a sequel is in the pipeline, and which I’ve no doubt will be just as enjoyable.

So if you’re a fan of old school horror films, and spiky detectives, I can thoroughly recommend The Nine Deaths of Dr. Valentine – not only is it an excellent read, it’s also currently available at a great price. Get yourselves over to the Spectral Press website, and make with the clicky-clicky. That is all.