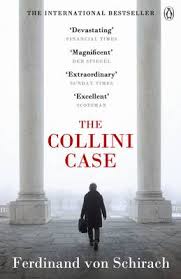 It’s somewhat uncomfortable to admit you have reservations about a book as solemn as The Collini Case. Written by German-born lawyer von Schirach, it centres on the murder of a wealthy industrialist, by an Italian man with seemingly no connection to him. After shooting him dead, the murderer (the eponymous Collini) further disfigures the victim, before quietly waiting for the police to arrive. All of this suggests there must be something connecting them, however deep in the past it may be.

And so it proves. I’ll say no more, but as this is a relatively short book (190 pages in my paperback edition, printed in an unusually large typeface; in something more typical that would fall closer to 150), you don’t have to read very far to find out just what binds murderer to victim. The bulk of the book centres on Casper Leinen, the young lawyer charged with providing Collini’s seemingly hopeless defence. It is a task about which he has some reservations, and from which his colleagues and family do their best to dissuade him.

The story itself is quite slight, and includes some unnecessary diversions which feel as if they are they to bulk the novel out. More noteworthy is the fact that the novel is clearly something of a crusade for the author. It’s very unusual to read a book which has been purposefully written to highlight a specific injustice, but The Collini Case is just that – and given that it concerns a specific point of law, von Schirach does well in laying this out for the reader, and making a complex issue easy to understand.

All of which I applaud, and as I said at the beginning, it’s difficult to dislike a book written with such good intentions. And yet – in places The Collini Case is annoyingly clumsy, particularly when von Schirach withholds information from the reader. At one point Leinen visits an unnamed government building in Ludwigsberg, where he spends five days reading through files, and taking notes and photocopies. At the end of this, ‘Leinen knew what he must do’ – and yet at no point does von Schirach say what Leinen is looking at, or what the building is. This is somewhat infuriating – I can understand that the author does it to increase the tension, but it’s very odd that Leinen’s research, so crucial to his defence of Collini, is described in such sketchy terms.

There’s a similar problem towards the end of the book when, during the trial, a surprise witness is called. Interestingly, this results in surprises for both the prosecution and the defence, but I also wondered how realistic and legally permissible this would be. Even if it is allowed, the scene struck a dull, cliched note. It brought to mind those Perry Mason TV movies I watched as a teenager on a Sunday night, Raymond Burr up against the same poor bloody prosecution lawyer who always lost. And because von Schirach withholds information earlier in the novel, when the revelations all come out at the end they do so in a rush, and make the climax feel somewhat artificial.

I’m probably nit-picking. In the book’s defence, the prose is solid and clear – a result no doubt of von Schirach’s legal background. It also moves along at a swift pace, and given the short length won’t detain you for very long. Lastly, there’s also no doubt that the author’s heart is in exactly the right place – and if it results in a change in the law in Germany (as the afterword seems to suggest) then the publication of The Collini Case will have been wholly worthwhile.