On Mandela, Shakespeare and the Robben Island Bible

Like many people I can only wonder at how, after close to 30 years in prison, Nelson Mandela emerged from Robben Island in 1990 with such dignity, going on to negotiate with the white ruling elite which had condemned him. How many dark nights must there have been during his time behind bars? Where did his inner strength come from? Clearly there is no single answer, but one part of it may lie with a book that became known as the ‘Robben Island Bible.’ 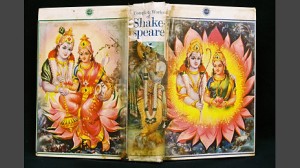 The name itself is something of a joke. Political prisoners held on Robben Island were allowed a single book, usually a religious text. One inmate, Sonny Venkatrathnam, was determined to smuggle into jail something more sustaining for his incarceration. He asked his wife for a copy of the Complete Works of Shakespeare, a book he later claimed to the guards was ‘the Bible, by William Shakespeare.’ To further disguise it, Venkatrathnam later covered the book in Diwali greetings cards, supplied by a fellow inmate.

The book was circulated in secret amongst the inmates on his ward, in some cases being used as a teaching aid to help them learn to read. Shortly before Venkatrathnam was released in 1977, he asked each of them to sign it, turning the book into a memento of his time in prison. His fellow prisoners added their names, and many of them also marked their favourite passages, from The Tempest, King Lear, Hamlet and many others.

Nelson Mandela signed his name in the margin of the book on 16 December 1977. He wrote it next to a passage from Julius Caesar, a play with which he had a long-standing relationship. Over 30 years previously, in 1944, Mandela was one of a number of young students who formed the Youth League of the African National Congress. Their first manifesto ended with two lines from Shakespeare’s play:

On Robben Island, ten days before Christmas 1977, Mandela signed his name against the following passage: 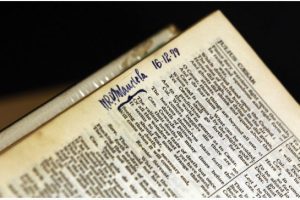 Cowards die many times before their deaths:
The valiant never taste of death but once.
Of all the wonders that I yet have heard,
It seems to me most strange that men should fear,
Seeing that death, a necessary end,
Will come when it will come. (Act 2, Scene 2 l.32–7)

I can’t think of a more fitting epitaph for such a singular, extraordinary man, who faced the many challenges in his life with such courage and dignity. Except perhaps to strive to adhere to this philosophy myself, and encourage those around me to do the same.