What is evil? That’s a question that’s kept philosophers, artists and writers busy for thousands of years. Literature is full of examples, one of my own favourites being Shakespeare’s Richard III, a play I’ve been mildly obsessed with since my teens. This is probably because it was the first Shakespeare I remember seeing in the theatre. The fact Derek Jacobi played the lead was as good an introduction to the play as I could have hoped for, and I’ve since seen at least a dozen other productions of it.

I thought of Richard more than once when reading Jim Thompson’s Pop. 1280. The book is a first person narrative, told from the point of view of rural Sheriff Nick Corey. When we first meet Corey, he seems nothing more than an amiable, amusing fool. He is a man seemingly plagued with troubles – ‘I had so many troubles that I was worried plumb sick‘ – although to the reader they seem somewhat comic. Take sleep as an example – ‘You might say I didn’t really get no sleep at all… It’d be maybe twenty or thirty minutes before I could doze off. And then, no more than eight or nine hours later, I’d wake up. Wide awake. And I couldn’t go back to sleep, frazzled and worn out as I was.‘

Corey’s attitude to his job is also somewhat surprising.  ‘I probably ain’t real smart – who wants a smart sheriff?  – and figure it’s a lot nicer to turn your back on trouble than it is to look at it.’ It’s more about doing as little as possible, or rather just enough to maintain his position. At first, Corey seems harmless – lazy, gluttonous, slothful, under the thumb of his domineering wife – but no more sinful than that.

All of which just goes to show how deceptive appearances can be. As the novel proceeds, Thompson shows us in Corey a murderer, a liar and a slanderer – a man easily as evil as Shakespeare’s Richard. Like him, Corey puts on a front to the world, whilst also taking the reader into his confidence. These asides often occur when Corey is on the point of killing another victim, and are some of the most chilling passages in the novel – where the mask slips and we hear Corey talk in his real voice, not the bullshit halfwit drawl reserved for the residents of Potts County. ‘What I loved was myself, and I was willing to do anything I god-dang had to to go on lying and cheating and drinking whiskey and screwing women and going to church on Sunday with all the other respectable people.’

And yet, unlike Richard, there’s a deadness at the heart of Sheriff Nick Corey. When we watch Richard III, we are half appalled and half enthralled by his quest to become king – we want him to succeed, just so that we can witness his downfall at the end of the play. But in Pop. 1280, Corey is an altogether more repellent character, with a peculiar absence at his heart. Richard murders because he wishes to become king, but just why does Corey do it? He says that he acts in order to maintain his position as Sheriff, but are these extremes really necessary? We are left finally wondering whether in fact Corey enjoys killing for its own sake. Is he insane? There’s the suggestion of this at the end of the novel; but equally this could be another trick, another language that he adopts in order to hide his true motivations and escape punishment. Certainly, the resolution that we have at the end of Richard III is missing from Pop. 1280, which adds to the novel’s sense of uneasiness and uncertainty. 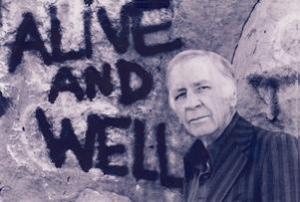 If you’re in need of an affirmation of the inherent goodness of mankind, then Pop. 1280 probably isn’t the novel for you. But if you want to read what Stanley Kubrick (for whom Thompson wrote the screenplays for The Killing and Paths of Glory) called ‘the most chilling and believable first-person story of a criminally warped mind I have ever encountered’, then I must heartily recommend it. Whilst undoubtedly powerful, it probably doesn’t quite match up to my all-time favourite Thompson novel The Grifters (written the year before), which is arguably more amoral, more heartless and more lacking in redemption. Jim Thompson was a unique stylist, a writer who ploughed his own furrow and didn’t imitate anybody else. In crime fiction, that’s a rare thing indeed – and reason enough to get some Thompson into your life if you haven’t done so already.