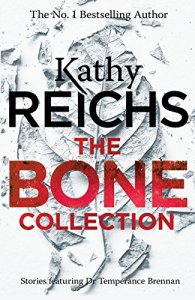 My own interest in forensics goes back to Monday nights 30 years ago, watching Jack Klugman in Quincy M.E. growl his way through another moider. So it’s surprising that I haven’t read any of Kathy Reichs’ work until now, but she’s certainly an author I’ll be coming back to. Since 1997 Reichs has written 18 novels featuring forensic anthropologist Temperance Brennan; but in The Bone Collection Reichs gives us a collection of four (longish) short stories, each one also featuring Brennan.

Appropriately enough for a reader new to the series, one of these stories describes how Brennan was first drawn into the world of forensic anthropology. In ‘First Bones’, Brennan is asked to assist the police in identifying a badly burned corpse in the absence of their regular pathologist. Despite initial misgivings, Brennan quickly discovers a taste for the work and the satisfaction that comes from providing justice for the living – satisfaction that studying thousand-year old bones just can’t give her.

Three more stories take Brennan far and wide. In my favourite story ‘Bones in Her Pocket’, Brennan is called to a crime scene beside a lake; and when she examines the body in more detail in her lab, she makes a surprising discovery in the pocket of the victim’s jeans. It’s one that eventually leads Brennan right to the killer’s doorstep, where she makes another gruesome find.

In ‘Swamp Bones’ Brennan find herself amongst the Florida Everglades, investigating the grisly stomach contents of a monster python; whilst ‘Bones on Ice’ sees Brennan investigating a corpse found in one of the highest places in the world. All of these stories are great fun and have a real mystery at their centre; you’re never quite sure what direction they’re going to take you in.

Reichs’ writing is satisfyingly no-nonsense, and moves along at an engagingly brisk pace. Whenever Brennan arrives at a new crime scene, or meets a new suspect, her scientific background takes over: assessing, considering and analysing every detail. Reichs is not afraid to thrown in medical terminology – I didn’t understand all of it, but that doesn’t matter too much. You get enough of the gist to know what is going on, and the jargon and technical language makes the writing pleasingly authentic. Which is not surprising, given Reichs’ own extensive (and continuing) forensic experience.

Like all the best stories, Reichs’s writing takes you into an unfamiliar world, giving you privileged access to somewhere you wouldn’t normally see. And perhaps wouldn’t want to; like Quincy before her, I can’t help but admire the work that Brennan does – but I’m not sure it’s something I could do myself, however strong I think my stomach might be. Best to leave the moiders to the professionals…