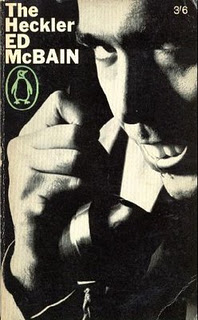 Absence makes the heart grow fonder, so they say – not that I’d planned on being gone this long. It’s been over two years since I last picked up an 87th Precinct novel – call it life getting in the way – but like meeting up with an old friend, in stepping back into Ed McBain’s fictional (and nameless) American city it feels like we’ve never been apart. Regular readers of this blog will know that McBain and I have history; I was 14 or 15 when I first read one of his crime novels, and I’ve now set myself the task of reading all 55 of his 87th Precinct books in the order in which they were published. It’s taken me over five years to read a fifth of them; at this rate, I’ll get to the last book in 2038, when I’ll be 64 years old. Despite the optimism of The Beatles that feels like too long a way off, so I’m going to do what I can to pick up the pace.

The Heckler is the twelfth book in McBain’s epic series. It’s a significant one to come back to as it is also the first to introduce his uber-villain the Deaf Man (we never learn his real name, although he does use a creative range of pseudonyms, all of them linked to his – authentic or otherwise – disability). Proverbial bad penny, this criminal mastermind features in five later novels in the series; and to make this point especially clear, McBain has one of his detective squad reading Sherlock Holmes near the beginning of The Heckler, so that we can make the link between the Deaf Man and Moriarty ourselves. The robbery plot which McBain describes in The Heckler is, for such an evil genius, satisfyingly complex – so much so that, for much of the book, it’s not clear – (to either the reader or the hard-working boys of the Eight-Seven) which bank, jewellery store or high-end shop is being targeted.

One of the strengths of McBain’s writing is his dialogue, which in The Heckler is as snappy and fast-paced as usual. There’s a hilarious exchange near the beginning of the book between two detectives and a drunk witness in a bar; the patience needed by the policemen to winkle out the information is palpable, and this makes the scene even more amusing. McBain has that gift which places the reader right in the room alongside the characters. The printed page evaporates, and you are swept along with dialogue which you now feel you can actually hear – an experience less akin to reading a book, and more like watching a play or a film. McBain had some success with the latter (he wrote the script for Alfred Hitchcock’s film The Birds, amongst others), so this is perhaps not surprising.

The Heckler also contains some lovely descriptive passages, which McBain is less celebrated for, but in my opinion should be. Take this example; attempting to access a locked apartment which he believes is a crime scene, Detective Steve Carella climbs to the roof of a building to use the fire escape. Opening the door from the stairway, he steps out and takes in the scene around him:

He could see the city spread out around him as he crossed the roof, the sharp, vertical rectangles of the apartment buildings slit with open windows, the water tanks atop each roof nesting like shining dark birds, the blue sky beyond and the tracery of the bridges that connected Isola to the other parts of the city, the solid heavy lines of the old bridges, and the more delicate soaring lines of the newer bridges, and far below him the sound of street traffic and the hum of a city rushing with life, kids flying kites from neighbouring rooftops, a man down the street swinging his long bamboo pole at his pigeons, the pigeons fluttering into the air in a sudden explosion of grey, beating wings, the April sun covering the asphalt of the roof with yellow warmth.

There’s a lot I love about this paragraph. I love the fact that it is just one sentence (when McBain could easily have made it several), mimicking the steady cop’s gaze that Carella uses to take in his surroundings. I love McBain’s use of lines and angles, which again feels very cinematic and is very visual. And I love his use of bird imagery at the beginning and the end, reminding the reader of Carella’s elevated position – reinforced by the repetition of the word ‘roof’ – and the sky which surrounds him.

Enough with the English class. If it isn’t already apparent, I loved The Heckler; it’s certainly one of the most fun books I’ve read in recent months. So much so, that (thanks to the wonders of the internet) I’ve ordered the next five books in the series, and will be making short work of them once they arrive. Next up is See Them Die, which in a crowded field still manages to bear one of McBain’s most arresting titles. I look forward to seeing if the rest of the book matches up to it.