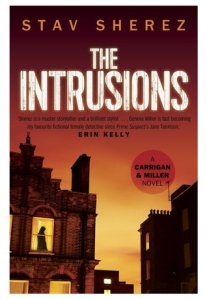 You – what are you afraid of? I’ve never been keen on heights, and also have a strong dislike of confined spaces – anywhere that prevents me from moving my arms and legs. My idea of hell? To be thrown out of a plane, shut inside a glass coffin. As phobias go, it’s quite niche, and highly improbable.

Much more likely and unnerving is the fear that Stav Sherez explores in his excellent police procedural The Intrusions, namely the cruelties that people can inflict on each other online. A quick Browse through Twitter, Youtube or any one of a dozen other social media sites confirms that the callousness of some of the comments is breath-taking. People use words and phrases they would never dream of saying to someone face to face; and yet in the online domain, these insults somehow become acceptable. Is it something similar to road rage – the fact that you can’t see the other person driving the machine – and therefore have less empathy for them? Perhaps.

In The Intrusions, Sherez’s detectives Carrigan and Miller are drawn into an initially confusing case, one at first described by a confused young woman seemingly under the influence of drugs. She describes a friend being abducted; and as evidence emerges to support her story, the trail leads online. In telling this story, Sherez introduced a new word into my lexicon: ratting. Taken from Remote Access Tool (RAT), this involves someone hacking into your laptop and use the hardware (or the files saved on it) against you, in a vicious campaign of intimidation and blackmail.

Much of this was news to me; and Sherez does an excellent job of bringing Luddites like myself up to speed, his necessary passages of exposition delivered by a refreshingly bullshit-free detective from the Online Crimes Division. Sherez has done his research, and if ratting is already as widespread as he suggests, it is also very frightening. If this is the world my daughters are growing up into, I shudder to think what other dangers they might face when they reach adulthood.

As usual, Sherez’s control of the narrative is excellent, and utterly compelling – I raced through The Intrusions in 24 hours dead, the current six week summer holiday allowing me the luxury of staying up late to read. As in his previous novel Eleven Days, Sherez paints his detectives as fully rounded human beings, with lives and concerns and stresses outside of the investigation, and ensuring that the reader empathises fully with them. Sherez is a uniquely sympathetic writer, and this is one of the many pleasures of his writing.

My only criticism of The Intrusions would be the writer’s desire to tie everything together, making the climax and resolution perhaps a little too unbelievable. This is perhaps only an issue because of the time Sherez has taken to build a realistic and plausible London – one which, in the author’s own words, lies ‘five minutes into the future’. However, whilst I would have been comfortable with more loose ends, this is also me trying to pick holes in what is a terrific, wholly contemporary piece of crime fiction. Do yourself a favour and seek it out.